Map, circa 1850s, with “Kueit” clearly marked on this map by German geographer Karl Ritter

The area that is today Kuwait has seen a wide array of coins throughout the centuries: Abbasid dirhams and dinars, Ottoman paras and liras, Austrian thalers, Indian rupees and others. However, conventional history of Kuwait’s coins begins only recently – in 1961, which is when the Kuwaiti Dinar was first issued by the Currency Board. This was not the first time Kuwait established its sovereignty by issuing coins. One lesser known fact is that there had been at least one previous attempt to create a local currency. Sheikh Abdullah II Sabah II Al-Jaber I Al-Sabah (1814–1893) was the fifth monarch of Kuwait and eldest son of Sheikh Sabah II Al-Sabah whom he succeeded. Sheikh Abdullah ruled from 1866 to 1892, and in 1886, he ordered the minting of a copper coin, known at that time as the Kuwaiti Baiza. 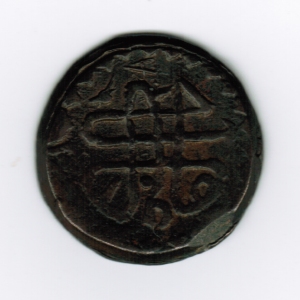 The primitive, crude, hammered coins were locally produced. According to Kuwaiti Islamic coin specialist M. Al-Hoseini, the person overseeing the minting operation was a senior member of the prominent Bodi tribe. Very few coins were produced, with up to 4 possible types with notable distinctions in the text, design, and even planchet thickness. The obverse reads “ضرب في الكويت” (struck in Kuwait) along with the date 1304 (1887), and the reverse carries the seal of Sheikh Abdullah. The coins circulated for several weeks but were short lived.

Due to extremely low mintage figures and limited circulation, the 1 Baiza is particularly rare. The Standard Catalog of World Coins lists two types (KM# 1 is the one depicted throughout this entry), and indicates “Rare” instead of an actual value, further highlighting that the coin is generally not collectable due to the combination of rarity and immense historic significance that it possesses. In Steve Album’s list, the coins have an RRR rarity designation, defined as “Almost never available. Few collectors will ever have the chance to acquire these pieces.” 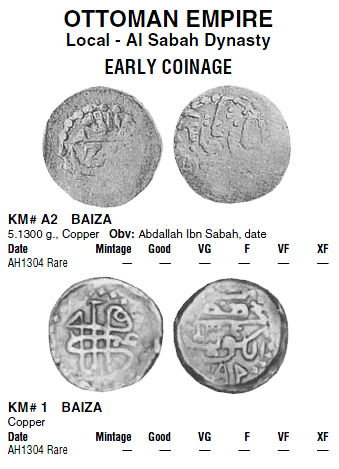 The coins as they are listed in Krause’s Standard Catalog of World Coins, 19th Century.

We were able to locate 4 previous listing records for this coin, appearing on the market approximately once every 10 years: 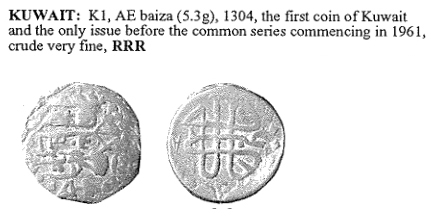 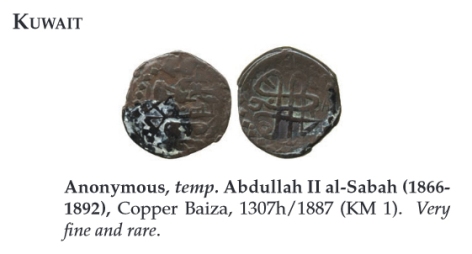 And finally, a Kuwaiti book from the late 1980s on the history of Kuwait’s coins and currency, with the Baiza on the front cover, once again acknowledging its historical significance. 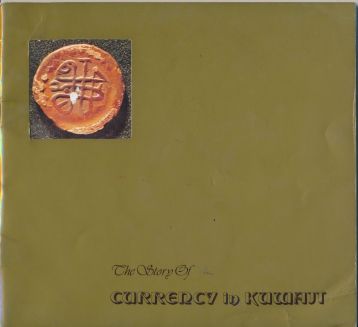 Book, “The Story of Currency in Kuwait”, with the Kuwait Baiza on the front cover