This is a remarkably clear and dramatic brockage error 5 Piastres from the Sultanate of Egypt. It shows an incused, mirrored image of the obverse in place of the reverse. Though the AH1333 date appears twice, the obverse design is absent, and consequently it is not known whether this error was struck in 1916 or 1917. According to Wikipedia:

Brockage errors are caused when an already minted coin sticks to the coin die and impresses onto another coin that hasn’t been struck yet, pressing a mirror image of the other coin into the blank coin. Brockages are relatively rare among modern coins of industrialised countries where mints exercise a strict production control and somewhat less rare among the modern coins of some developing countries which operate their own mint; in good condition, coins with clear brockage are a collector’s item and can sell for substantial amounts of money. 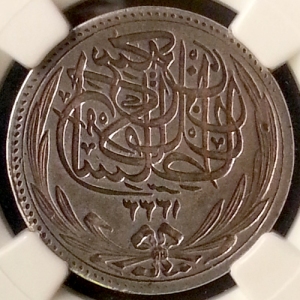 What makes this particular error so interesting is that when this error was discovered, it got enough attention to be featured on the front page of La Bourse Egyptienne (December 7, 1929 issue). The coin is illustrated, with a caption describing the “great interest” numismatists have given this coin where “the reverse is written in reverse.”