As stated in this blog in the past (see here and here), there is a number of Arab coins that have errors as part of the die used to create the coin. This is due to an error in design or engraving. A particularly fascinating form is when part of the legend appears in retrograde.

The coins of Muscat & Oman, which were also briefly discussed in this blog, contain a few varieties of retrograde Hijra dates. Specifically, some of the many varieties of the 1/4 Anna coin dated AH1315, have the date in retrograde, with one variety where the characters are also in reverse order. Both varieties are illustrated below.

Another example that is worthy of mentioning is the Egypt 5 Piastres of AH 1277, regnal year 4. In this case, the character “4” designating the regnal year is the one that was retrograde (actually, upside down but with a retrograde effect). Both examples of a normal and a retrograde 4 are illustrated below. 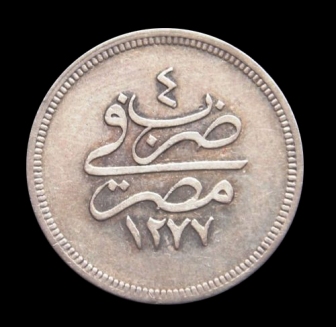